With a heavy heart, we are letting you know that the building of Serbian American Museum has been sold off and the Museum has ceased to operate. 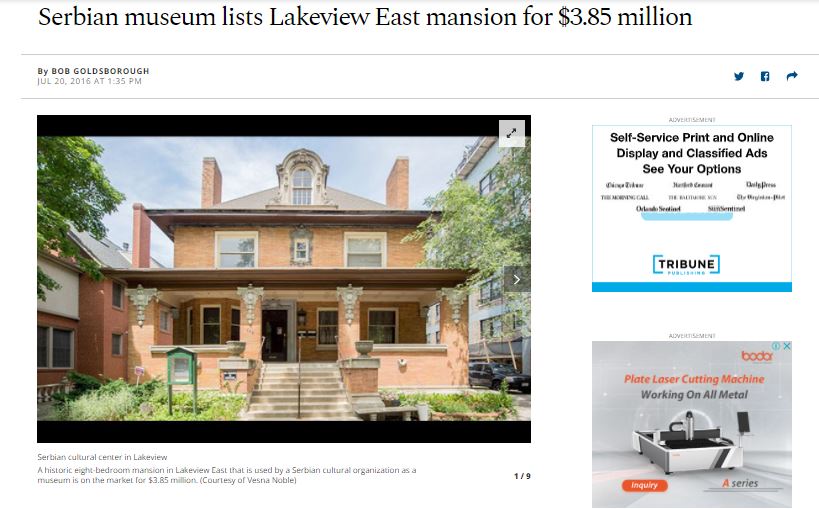 Dear Members and friends of the Serbian American Museum – St. Sava (the “Museum”, or “SAMS”, we are pleased to inform you that

Justice has been served!

This past Thursday, January 17, 2019, a final verdict was issued in favor of the Defendants (consisting of all the Directors of SAMS) on all counts. Tomorrow you can read the entire verdict on our website, www.serbianamericanmuseum.org.

The Plaintiffs’(Nebojsa Radovanovic, Martina & James Bertsch, Sava Rakocevic,Dragoljub Vujosevic,Vladimir Vertus) actions and their non-credible witnesses’(Simeon Zafirovski, Milos Todorovic and Vladimir Mulina) testimonies have caused great loss to SAMS and our Serbian community by two years of needless litigation and substantially reduced value from landmark designation. After many months and hundreds of hours spent unnecessarily, we are at the beginning again.

What our opposition considered a great victory by obtaining landmark status was simply money out of our pocket and of no benefit to the Museum’s nonprofit mission. As you can see from the written response of the Landmark Comission, ”Srpska kuca” is nowhere mentioned on the plaque that the City of Chicago will install on our building :

”Daniel O. Hill House. Frederick W. Perkins, architect 1902. This American Four Square mansion is one of East Lake View's best remaining single-family residences, finely designed with Prairie-style proportions and Classical-style ornament. Built for a silk merchant working for the Marshall Field and Co. department store, the house is a rare surviving building by a significant Chicago architect. The residence exemplifies the large, well-crafted single-family houses that dominated this lakefront neighborhood’s streetscapes during the years immediately after its annexation to Chicago in 1889.

All of the above misguided actions by the Plaintiffs and their supporters, including certain Serbian periodicals, have had a significant negative impact on SAMS’ reputation, our Board, and our entire membership. Those who caused the harm should be held responsible for it.

SAMS’ future real estate and legal options will be discussed at the special membership meeting to be held in February. We will inform Members by separate e-mail of the date and the agenda.

PLEASE PAY YOUR MEMBERSHIP DUES FOR 2019 BY THE END OF JANUARY.

We are grateful to our president Dr. Pavlovic for paying SAMS’ bills and keeping the Museum out of foreclosure. We are also grateful to Vesna Noble for putting numerous hours into preparing the defense, working closely with the Museum’s dedicated insurance defense counsel.

The Board of Directors gives credit where due, to all those who selflessly fought for truth and the best interests of the Museum and the Serbian community. If you should have the opportunity to express personally your gratitude and give credit where due, it will be greatly appreciated.

We are extremely happy to share this good news with our committed Members and all good-willed people from our community.

Regards, Board of Directors of SAMS 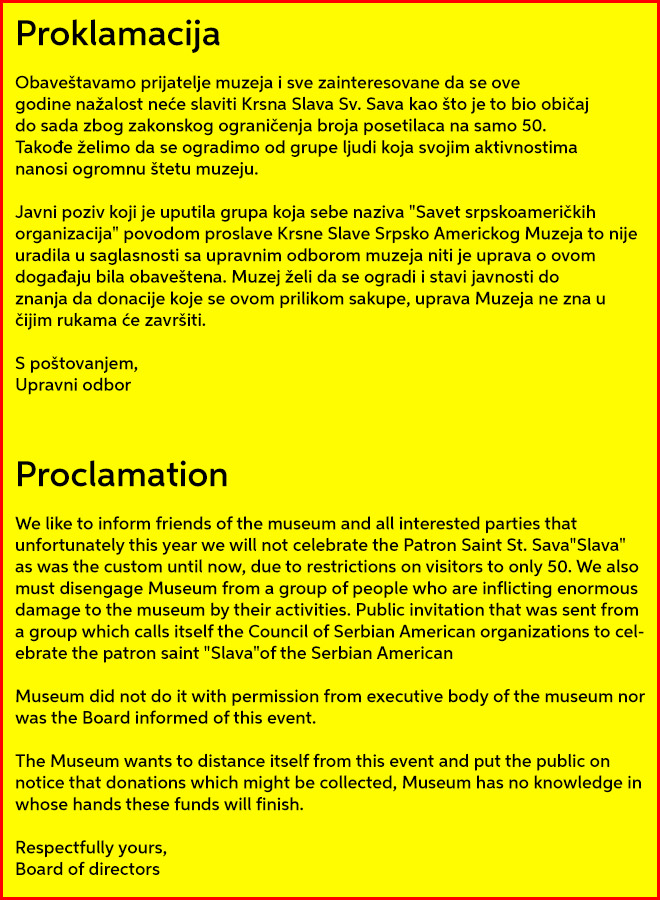 Dear All, We welcome the initiative of the Board of Directors of SAMS relating the future of the Museum and…